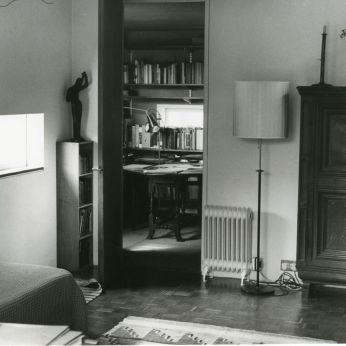 Throughout Imogen’s childhood the Holst family lived a fairly peripatetic existence.  There was no Holst family home but rather a series of rented houses and cottages in London and the Essex countryside. As soon as Imogen was old enough she was sent to boarding school and there were even occasions when she spent the holidays at the homes of family friends. Her father, Gustav, who required solitude and quiet for composing, lived away from his wife and daughter for long stretches at a time. And Imogen and her mother, Isobel, never developed a close relationship.

Never a wealthy person, Imogen continued living in rental or work accommodation throughout her adult life, until in 1962 she moved into No. 9 Church Walk, Aldeburgh.  The house had been designed and built for her by the modernist architect HT (Jim) Cadbury-Brown in a corner of his own garden. Although Imogen did not own the house and land outright she paid only a peppercorn rent to Cadbury-Brown and remained at Church Walk for the rest of her life.

HT (Jim) Cadbury-Brown being interviewed at his home in 2007 (Copyright: Britten-Pears Foundation)

Stylistically, Imogen’s house shares the same key, modernist design elements as Cadbury-Brown’s own Grade II listed home, such as the optimisation of light sources; horizontal sectional windows; floor-to-ceiling doors;  and a completely flat roof. It was in stark contrast to her previous rented flat in Aldeburgh, which Ronald Blythe described as ‘tall and narrow-roomed.’ One visitor to 9 Church Walk described Imogen’s new home as ‘uncompromisingly modern’, but photographs from the 1970s show that she was not averse to mixing styles and chose to decorate her modernist home with rustic jugs of artificial flowers, candlesticks and antique pieces of furniture.

In 1964 Imogen returned to writing her own compositions and promoting her father’s musical legacy. Church Walk provided her with the perfect space for this work.  Today the house is still used in much the same way, as it is offered as a retreat for composers by the Britten-Pears Foundation. You can read about one composer’s recent experience of working in Imogen’s home here.

From 17 to 20 June 2016 visitors will have the unique opportunity to see Imogen’s home when we open it up as part of the Aldeburgh Festival.  Along with the Holst Archive, the Britten-Pears foundation is custodian of many items and furnishings belonging to Imogen, and some of these will be on display during the exhibition, including Gustav Holst’s oak music cabinet.  If you happen to be visiting Aldeburgh during the Festival make sure you include a visit to Church Walk in your schedule. You can see details of times and tickets here.

During the Festival there will also be an exhibition featuring some of the fabulous archives from the Holst Collection. On display will be items highlighting the interests and talents that Imogen shared with her father Gustav. You can find details of this event here.