On the last Monday of the Aldeburgh Festival, my colleague and I had the opportunity to hear some of Imogen’s music performed in Blythburgh Church, one of the stunning angel-roofed churches of East Anglia. It was a fabulous afternoon and we were treated to a couple of Imogen’s choral works and one of her compositions for cello (oh, and there were some bits and pieces by Tippet and Britten in the programme as well).

The event was quite timely as I am currently midway through cataloguing Imogen’s music manuscripts.  With all personal archives there are certain series of records that really constitute the centrepiece of the collection; and as far as the Holst papers are concerned, it is the music manuscripts that form the heart and soul of the archive.

Throughout her life Imogen had a somewhat ambivalent relationship with composition. Early in her career, while still a student at the RCM, she won the Cobbett Prize for composition with her Phantasy for string quartet. Once she became a teacher however she focused her creative energies on educational works, and during the years she spent working as Britten’s music assistant it seems she ceased writing her own compositions almost entirely.  Imogen was often reticent about her own work and refused to regard herself as ‘a true composer’; yet she seems to have always been drawn back to original composition and her later years, after she left Britten, are marked by a resurgence of  creativity.

Cataloguing Imogen Holst’s music takes on added significance given that many of her own compositions remain unpublished and those that have been published are often difficult to track down.  Her corpus of work includes original compositions, arrangements, realisations and editions; and reflects her sometimes conflicting desire to create ‘useful’ music for amateurs on the one hand, and to make full use of her musical talents in the composition of ‘serious’ pieces for professionals on the other. Her arrangements of folk-songs, for instance, represent a significant and well-loved part of her work, but there is also an important group of choral works for professional choirs and ensembles. Imogen was a great gift-giver throughout her life and the compositions she wrote for friends and colleagues, as gifts for birthdays and other events, form another distinctive and very personal aspect of her work. Crucially, Imogen devoted a lot of her energy promoting the music of her father, to the detriment perhaps of her own work and reputation.

Click on the images below to see a gallery of Imogen’s music MSS, and you can now listen to some samples of Imogen’s string chamber music on our new Listen page. 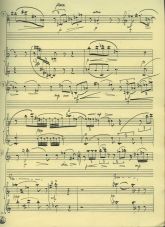 English folk-tunes arranged for piano (?1950s or 1960s): There was a squire of high degree [Copyright Holst Foundation]