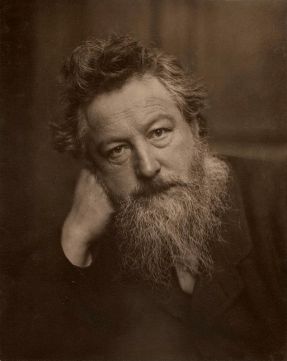 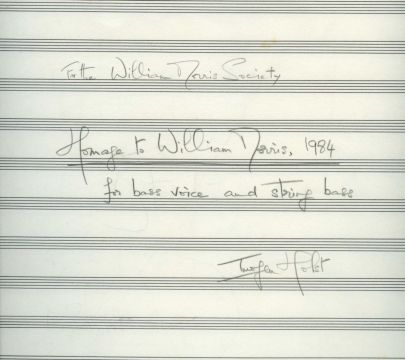 Walking through the gift shop of a well-known nature reserve recently, I spotted some William Morris mugs for sale. They were standard Morris giftware, i.e. mugs imprinted with one of his more popular floral motifs.  For many, this is what Morris’s life and work has come to mean – highly recognisable wallpaper and fabric designs.  But the name of William Morris crops up again and again within the Holst papers and his presence within the collection is a reminder of Morris’s other, less gift shop friendly, intellectual legacy.

Morris’s first influence on the Holst family was through his books.  Gustav Holst developed an interest in socialism in his early twenties, while still at the Royal College of Music.  After reading some of Morris’s books he joined the Hammersmith Socialist Society, probably around 1895, where he listened to lectures by Bernard Shaw at Kelmscott House, and was just in time to hear Morris himself speak (Morris died in 1896). Holst was committed enough to the cause to be asked to conduct the Hammersmith Socialist Choir, and there met his future wife, Isobel, a soprano who appears to have had an active involvement in socialism at this point in her life.

Although Holst’s formal commitment to socialism did not long outlast the death of Morris, the socialist ideals that Morris espoused can be seen in the very way that Holst lived his life and made his music. One event in particular sums up this influence. In 1911 Gustav Holst conducted the first performance of Purcell’s Fairy Queen since 1700. The performance took place at Morley College, a centre of adult education for working class men and women, where Holst had been teaching.  The performers that day were Holst’s Morley students, affectionately known as his Morleyites.  To them he would say ‘Morley exists for the training of amateurs. A little knowledge is not dangerous as long as you remember that it is only a little.  And the test of success is the amount of artistic enjoyment you get from performing, writing or listening to music’. Holst’s interest in early music, his commitment to teaching – particularly amateurs, and his desire to make music accessible to everyone regardless of class, all reflect Morris’s socialist principles and his admiration for pre-industrial cultural forms.

Gustav Holst’s connection with the village of Thaxted in Essex is another example of his ongoing links with socialism. While living at Thaxted, Holst became friends with Conrad Noel, a Christian Socialist, otherwise known as the Red Vicar of Thaxted!  Noel, along with Holst, was responsible for reviving folk traditions in the parish, and this is where Imogen Holst was first introduced to folk dancing and music. Her experiences of the enthusiastic folk dancing at Thaxted proved pivotal and led to her lifelong interest in and promotion of folk music. Through her father, Imogen imbibed other socialist influences. Like Gustav, she was also devoted to the democratisation of music making, as evidenced in her wartime work with rural communities.  And like her father she too was drawn to the ideals of an alternative community. For during the 1940s Imogen taught at Dartington Hall, where the Elmhirsts tried to establish a utopian community in sympathy with the Arts and Crafts movement. Here then, we can see the threads of Morris’s ideals emerging across generations in the twentieth century.

Morris’s influence on the Holsts is perhaps at its most tangible within their music manuscripts.  The second movement of Gustav’s Cotswolds Symphony is an elegy to Morris, and he utilises Morris’s words in several other works.  In 1983 and 1984 Imogen wrote her Homage to William Morris, a work she completed not long before her own death. In this piece Imogen uses words from Morris’s lectures and News from Nowhere, a book which, incidentally, is also referenced in the song writing of Nick Cave.

Overall, Morris’s presence in the Holst collection is a reminder of how personal archives shed light on the lives and impact of individuals other than the creators of the collection. As for Morris, once you get beyond the wallpaper, it is hard not to admire a thinker with the ability to influence musicians as diverse as Imogen Holst and Nick Cave… 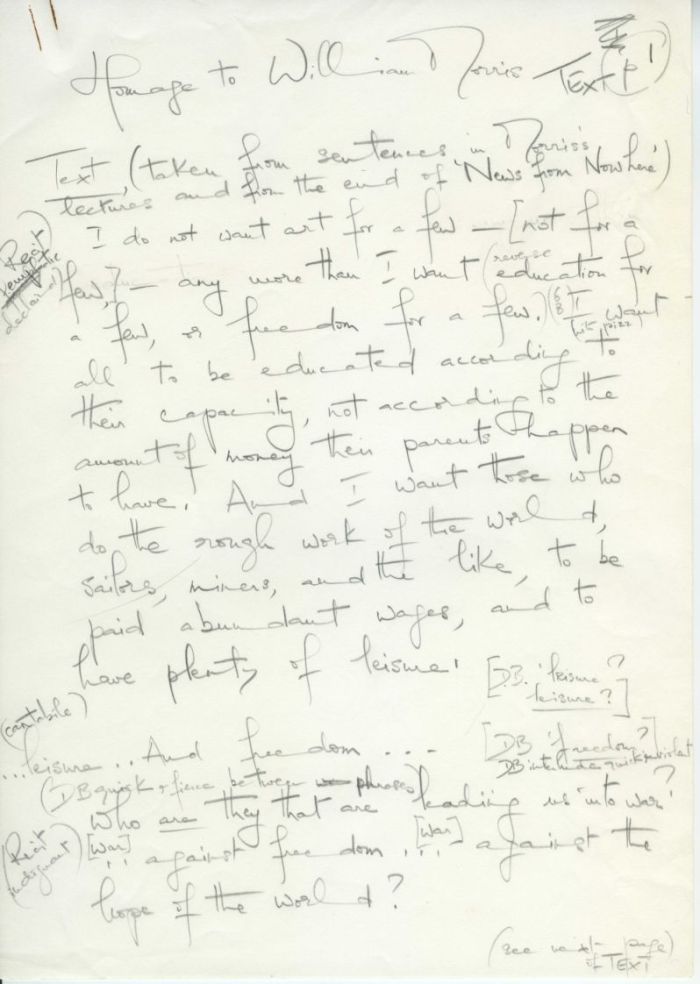 3 thoughts on “Morris and Co.”