Nobody panic- despite the title, this is not an (exceptionally early) festive post!

I had no idea that it was possible to observe, understand, and come to know, so many sides of one person through only one medium, until now. This is exactly what I have encountered in my first couple of weeks as the new Holst Project Archivist, engrossed in the task of cataloguing Gustav Holst’s notebooks and engagement diaries.

While to the eye, they appear as nothing special, simply every day notebooks, once tucked into a back pocket, these hastily, (and often scruffily) jotted records actually provide an invaluable insight into the man behind them, and also the man behind some of the most well-known English musical compositions of all time.

In Imogen Holst’s biography of her beloved father, Ralph Vaughan Williams contributes a poignant memory of a friend and contemporary:

Though he seemed sometimes to be living in a world of his own, yet if a friend or even a stranger wanted help, advice, or even a rebuke, he was there to give it. His music reaches into the unknown, but it never loses touch with humanity.

Undeniably, a similar impression can be drawn from Holst’s own personal papers.

It was in his mid-twenties that Gustav first became interested in Sanskrit literature and Hindu philosophy, reflected in compositions such as Sita (1899-1906), based on a Sanskrit text, and his Hymns from the Rig Veda (1907-1908). But it is his notebooks that really strike a chord with Vaughan Williams’ testimony, and their portrayal of a man immersed in both the unknown, and the distinctly human.

From a mind completely engaged in the”out of this world”, witnessed particularly in Holst’s sketches of astrological diagrams, a symbolic and altogether entirely different language, to his sometimes harsh, but one imagines, honest critique of musical performances, right through to the ultimate demonstration of humanity; simple shopping lists, and reminders of personal and domestic tasks to be done, noted alongside lists of Christmas presents for family and friends; Isobel, Imogen (Holst) and Vally Lasker are all noticeable names. 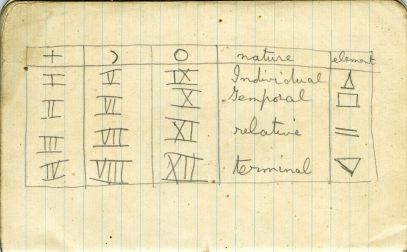 All find a harmonious home in the form of Holst’s personal notes and contribute to the story of a great composer, but also a family man with respect and regard for his family, colleagues, students and contemporaries alike.

Currently in the midst of sorting and cataloguing Gustav’s wonderful music manuscripts, I am looking forward to beginning on his correspondence in the next week and seeing what other light will be cast on someone, who is turning out to be, such an interesting and intriguing character.

Thank you for reading and watch this space!