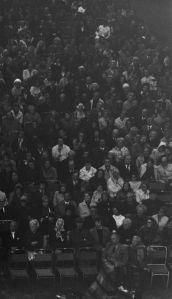 I have recently finished cataloguing the scripts of lectures and broadcasts which Imogen delivered throughout her life, and they have turned out to be sources of real insight into her ideas, interests and personality.

Imogen’s early love of dancing and her conducting experience made her at ease in front of an audience; she also had a natural facility for writing, and these skills, combined, enabled her to develop into an accomplished public speaker.  She became so practised in this aspect of her work that she appears to have given some talks using nothing more than a series of rough pencilled notes.

So, despite being a rather private person, Imogen gave many lectures, seminars and radio broadcasts, covering a wide range of topics from dance rhythms in Purcell to the process of ageing. Many of the scripts focus on the life and work of her father, Gustav, but these talks also showcase, in her own words, her ideas on music education, her impressions of music making in mid-twentieth-century Britain, and her interests as a musicologist. They also reveal something of Imogen’s personality – a deep seriousness combined with a well-developed sense of humour, which ensures her talks are both interesting and entertaining.

She begins by paraphrasing some tips from Prince Hesse on congratulating performers after a concert:

‘…to hell with English Reserve…Wear  your heart on your sleeve: show admiration and pleasure…Don’t say, ‘I don’t understand modern music’, it only saddens the player. If you are not sure if the piece was by Beethoven or Britten, don’t say so, as it depresses the artist: just say how much you enjoyed the performance and move sharply off before you have time to put your foot in it… Don’t try to be clever and to prove it by saying something negative…’

Imogen also warned against ill-timed and loud criticisms during the concert, such as the gentleman who, during the interval of a Britten opera, complained loudly: ‘Well, I can’t stand this any longer, I shall sit in the car until it is over’; or the audience member at another performance who exclaimed: ‘Why does everyone go on clapping? I wish they’d stop’. Other audience misdemeanours include excessive foot and finger waggling in time with the music (very distracting for the person next to you); having a go on the instruments during the interval (!); and falling asleep during a concert through sheer festival-induced exhaustion. Oh and whatever you do, don’t cough.